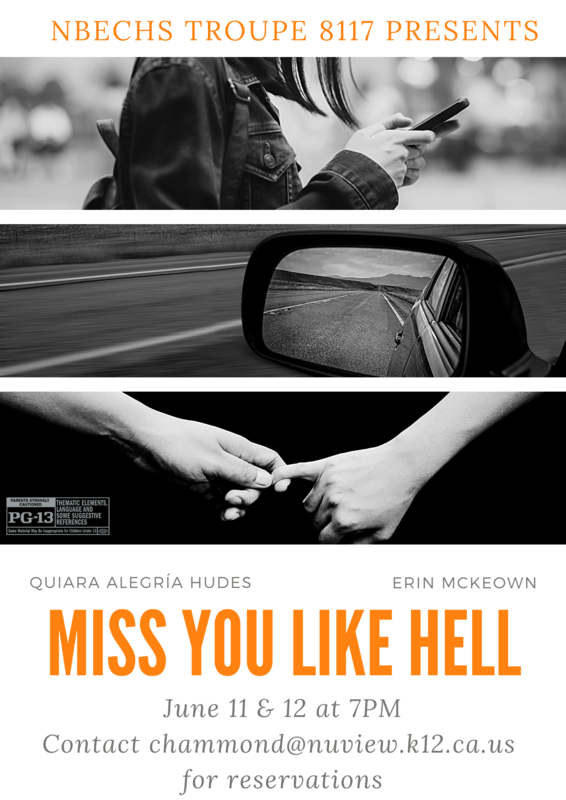 Live productions the month of June: Miss You Like Hell and Bright Star. Click here for more information.
Thespian Troupe 8117 at Nuview Bridge Early College High School would like to invite you to come out and see our live productions this month. We are producing 2 shows in the month of June. Reservations can be made for both shows on the form at the following link: https://forms.gle/QbafuEXutASbU8aq5
We hope to see you there!
Miss You Like Hell (June 11 & 12 at 7 PM)
When a whip-smart, deeply imaginative teenager agrees to take a road trip with her free-spirited Latina mother, neither can imagine where it will take them. Chance encounters with a medley of characters along the way bring them closer to understanding what sets them apart—and what connects them forever. At the heart of the story is a mother-daughter relationship complicated and threatened by immigration policies. MISS YOU LIKE HELL reminds us that musicals have the power to explore the exposed territory where political becomes personal. Featuring compelling original songs that are every bit as diverse and eclectic as America, MISS YOU LIKE HELL is a new musical that exudes the joy, love, and frustration of being a family in a changing country.
Bright Star (June 25 & 26 @ 7 PM)
Inspired by a real event and featuring the Tony®-nominated score by Steve Martin and Edie Brickell, Broadway’s BRIGHT STAR tells a sweeping tale of love and redemption set against the rich backdrop of the American South in the 1920s and ’40s. When literary editor Alice Murphy meets a young soldier just home from World War II, he awakens her longing for the child she once lost. Haunted by their unique connection, Alice sets out on a journey to understand her past – and what she finds has the power to transform both of their lives. Propelled by an ensemble of onstage musicians and dancers, the story unfolds as a rich tapestry of deep emotion, beautiful melodies, and powerfully moving performances. An uplifting theatrical journey that holds you tight in its grasp, BRIGHT STAR is as refreshingly genuine as it is daringly hopeful.